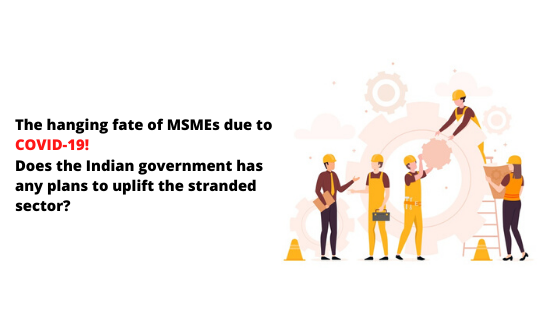 The MSME sector is on the verge of collapse. After Union Minister Nitin Gadkari cited concern in his last statement and asked industrialists to clear the dues of their vendors, India’s claims to successfully absorb the COVID-19 miseries has been put under the scanner. Are we really in a better position? If yes then why are millions of workers forced to return home on foot? If No, how ready are we to fight the impact?

MSMEs hold undeniable importance in India. 99.5% of MSMEs have been identified as micro employers and are almost equally distributed in urban and semi-urban regions of the country. And the rest are inordinately established in the urban cities. Contributing 30% to the economy’s GDP, the sector is feared to have lost 5 lakh crore of gross value added.

Furthermore, wages account for 80% of the gross value added which means 10 crore jobless workers collectively suffered a wage loss of Rs 4 lakh crores. As the virus outbreak has directly derailed more than 6.3 crore MSME businesses in India, any delay in action to rescue them could produce dangerous results.

What can we expect?

A fund stimulus package of 12 lakh crore on its way

By the end of Lockdown 2.0, the central government finally addressed the needs of the drowning MSME sector. With no official announcement as yet, sources hint at a stimulus package meant for rescuing the lifeblood of the Indian economy. As per reports, the government is looking forward to raising a major percentage of the money from the markets. According to the statement from the Finance Ministry that also controls the Economic Affairs Department, the government plans to raise 12 lakh crore in the fiscal year 2020-21.

With this move, the government foresees a major relief in uplifting the smallest organized sector in the country. Not only will the move ease the disparity between the expenditure and income but will also directly impact the unorganized sector employing millions of labourers.

Given the severity of the COVID-19 impact on the MSME sector, the government has identified major points to target. And as expected, the inability to pay the salaries has emerged as the main bone of contention. Therefore, the Centre is expected to use the funds towards providing wage support for workers. Furthermore, this will be formally brought under the Employees State Insurance Scheme Corpus.

MSMEs have been out of operations for more than 2 months now. Add to it the pending salaries of 2 months has worsened the circumstances. Thus, the sector looks up for a grant of at least Rs 80,000 crore to seek some relief from the pressures.

Despite aid promises from the government, lack of resources stands as a graving challenge among the MSME enterprises. There has been a major communication failure from the authorities that produced a sentiment of confusion among millions of workers. Whether they should leave for home or wait for the government to revive the industries, no one knows. And if left unattended, this could branch out to more complexities in the months to arrive. Hence, deserves immediate action.

Another key concern MSMEs are currently facing involves a lack of working capital. The central government is, reportedly, also planning to provide interest-free working capital to MSMEs. With production coming to a standstill, many businesses have found themselves severely cash-strapped, having not received dues for products they have already supplied.

As the industrial operations including those of FMCG production units has slowed down or completely halted, MSMEs those who were dependent on these units are facing a severe crunch of working capital. The government, therefore, has to address this to.

The million-dollar question is brimming to highlight those responsible – Did India act late in providing economic relief to the small scale industries?

Let’s face it. We shouldn’t be taking any pride over a lesser mortality rate when millions of daily wagers are forced to walk hundreds of miles.

In all honestly, the government did take long to announce the aid. Even though are COVID-19 numbers are less scary than the western countries, we lag behind their readiness to help the small scale industries. Canada, for example, pledged to raise USD 27 billion in direct support to businesses and their employees. While Germany is extending aid of USD 800 billion for the country.

As confirmed by Nitin Gadkari, industries, state governments, central government owe up to 6 lakh crore to allied vendors and other small industries.

There are no second thoughts that comparing our situation with those of developed nations in the west is the sheer covering of facts. As an economy driven by daily wagers, our problems are different and so should be our plan of action. Despite partial relaxation in the lockdown on 4th May, more than half of the economy was shut. And the number of workers losing their jobs is the scariest part – 10 crore.

However, the assurances from government authorities will inject new life in otherwise handicapped businesses. After successfully extending the moratorium facility to millions of people, such an initiative to provide relief package will pull the economy out of the misery.

A perennial thrill-seeker with an avid interest in transforming and improving lives around the globe through the wonderful gift of technology, I am the Senior Vice President of Henson Group . My specialties include Leadership, problem-solving, and putting cutting-edge technology (Cloud, Artificial Intelligence, Machine Learning) in the hands of corporates, startups, and professionals. I have been obsessed with the idea of using technology to solve real-world problems. Having previously worked with global software giants like TCS and IBM, I now usually sit at my office at the World Trade Center, New York and Chandigarh , India. Among my greatest achievements, increasing the revenue of Henson Group by ten-folds in the past two years, remains my favorite along with the fact that Henson Group’s India center has now become ‘a center of excellence’ with its entire technical team being Microsoft certified. On the delivery side, I helped Henson Group attain the prestigious “ Azure Expert MSP Certification “ with Microsoft . Hailing from Jammu, my team has grown from five to 150 employees and associates in just two years. Even during COVID-19 era, our growth has soared while helping corporates, industries and startups to tide over many hurdles and challenges. Henson Group is recently featured at rank 132 in the Inc. 5000 Rating. Skillsets: Cloud Services, Managed Services Provider (MSP), Computers & Networks, Artificial Intelligence, Machine Learning, Project management, Leadership , Cyber Security Mr. Dutta manages and monitors the performance of consultants and partners on engagements, communicating with the account executive, project teams, and customers. Works in close collaboration with the Microsoft project manager, providing hands-on project management expertise as required. Mr. Dutta provides direct oversight over the MSP Client Operations team responsible for managing MSP relationships with existing MSP clients and day to day operations of these accounts. Mr. Dutta oversees the Centralized Delivery Team that is responsible for high volume cloud migrations and MSP delivery to current clients. Team consists of over 120+ engineers and project managers. View more posts

One thought on “The hanging fate of MSMEs due to COVID-19! Does the Indian government has any plans to uplift the stranded sector?”